Seven manufacturing market trends for 2017, according to IHS Markit report at Hannover Messe, include more growth and an attention shift from remote cloud-based analytics to local and edge computing.

Technology was everywhere at Hannover Messe 2017, but there still is a gap between the creation of the next generation of manufacturing production and its actual use on the plant floor.

That was one of many finding at the 2017 research presentation by IHS Markit at Hannover Messe on April 26. CFE Media was a media partner for the presentation, entitled „Smart technologies impacting industrial market dynamics.”

Alex West, principal analyst for manufacturing technology at IHS Markit, said their research show there were four key challenges for manufacturing in the still-evolving age of the Industrial Internet of Things (IIoT):

„Some companies already support IIoT. Some industries have all elements for IIoT ready, but that’s more on discrete side than process side,” west said. Oil and gas has a huge opportunity to take advantage of IIoT, but at same time, the recent drops in oil prices has impacted their digitalization.”

Part of that education requires manufacturers to think about their own needs about how a data-driven manufacturing environment could improve their operation. „One big thing around IIoT is that manufacturers are thinking about their business a little bit today, but their business is changing tomorrow,” said Jenalea Howell, research director for IoT connectivity and smart cities for IHS Markit. It’s a challenge we need to put out for manufacturers. We’re seeing at the moment that they do not know what they want.”

1. Global markets to grow, despite headwinds

„The industrial automation equipment market is expected to grow in 2017, reversing two consecutive years of contraction. Last year, global industry revenue shrank 1.8% after also falling in 2015. The successive annual contractions were unprecedented, and they mirrored a similar decline in global revenue for machinery production and industrial automation capital expenditures during the last two years.

„This year’s growth, projected at 1.5%, will take place despite some headwinds, mainly in the form of low oil and commodity prices as well as a reduction in the sales of heavy machinery.”

2. Remote cloud-based analytics to shift to local and edge computing

„This year will see two shifts in the market. On the one hand, more announcements will be made on the scalability of cloud platforms to support local or in-house data processing. Here „edge” analytics will increasingly become a viable alternative to solutions hosted on remote sites. At the same time, continued market education will boost confidence in companies to store select data on the remote cloud, allowing them to glimpse the benefits to be gained from cloud analytics.”

„During this time of economic uncertainty, more vendors will choose to invest in automation at U.S. facilities in an effort to leverage tax incentives and a skilled workforce, rather than in offshoring production.”

„Expect to see an acceleration in acquisitions and partnerships this year, as automation companies fight over and target software vendors able to expand the smart manufacturing portfolios of the acquiring firms.”

„This will be a year of increased market consolidation across several capital equipment markets, such as those for motors, generators, turbines and generator sets. Last year, sales revenues fell in many segments—by 2.9% for medium-voltage motors, 4.3% for medium-power generators, 13.8% for steam turbines and 2.3% for generator sets. On top of struggling the past few years, these equipment markets have not seen orders keep pace, even as order backlogs were fulfilled. In fact, most suppliers have had to undergo large cost-cutting measures to remain competitive amid a shrinking global market, and companies have had to resort to rounds of employee downsizing to reduce operating costs.”

The increased prevalence in 2017 of OPC-UA—or Open Platform Communications Unified Architecture-together with the release of TSN—or Time-Sensitive Networking—is being touted by some as putting an end to the fieldbus wars.

The report said TSN „will enhance basic Ethernet technology by providing reliable and real-time connectivity over an Ethernet network. The advancements will not only reduce the cost of networking complex smart manufacturing installations, they will also serve to spur the convergence of information technology and operation technology. And although not yet released, TSN standards are expected to be published toward the end of 2017 or early 2018, with enabled devices to follow thereafter.”

7. Artificial intelligence to ramp up on the factory floor

„This year, robots featuring improved connectivity and sensing capabilities will continue to lead in the advancement of smart manufacturing. In particular, the kinds of tasks that robots will be able to execute will broaden greatly, thanks to vast improvements taking place in the pervasive broadband communication capabilities of industrial robots, alongside the incorporation of robots into the manufacturing IT system. All told, these developments will enable robots to share information with other smart devices and robots or with the cloud, at the same time helping to drive the application of AI technologies in robotics.”

„Every sector involved in the digitalization of industry was on hand to showcase its answers to the key question faced by industrial enterprises everywhere: How can I best get my company into shape for the digital future?” said Dr. Jochen Köckler, member of the managing board at Deutsche Messe.

Attendance rose to 225,000 in 2017 from 217,000 in 2015, which as the last year the show’s specific format. It included a record 75,000 attendees from outside of Germany, including 9,000 from China, 7,500 from India and 5,000 from Poland, which is a record for a Partner Country. Attendance in 2018 could be even larger. For the first time, Hannover’s Industrial Automation and Motion Drives and Automation shows will operate under the combined title of Integrated Automation, Motions & Drives. CeMAT, which is Deutsche Messe’s logistics trade event, will be a biannual part of Hannover Messe beginning with the 2018 fair. 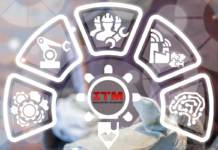 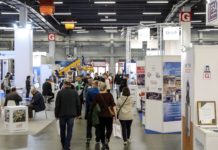